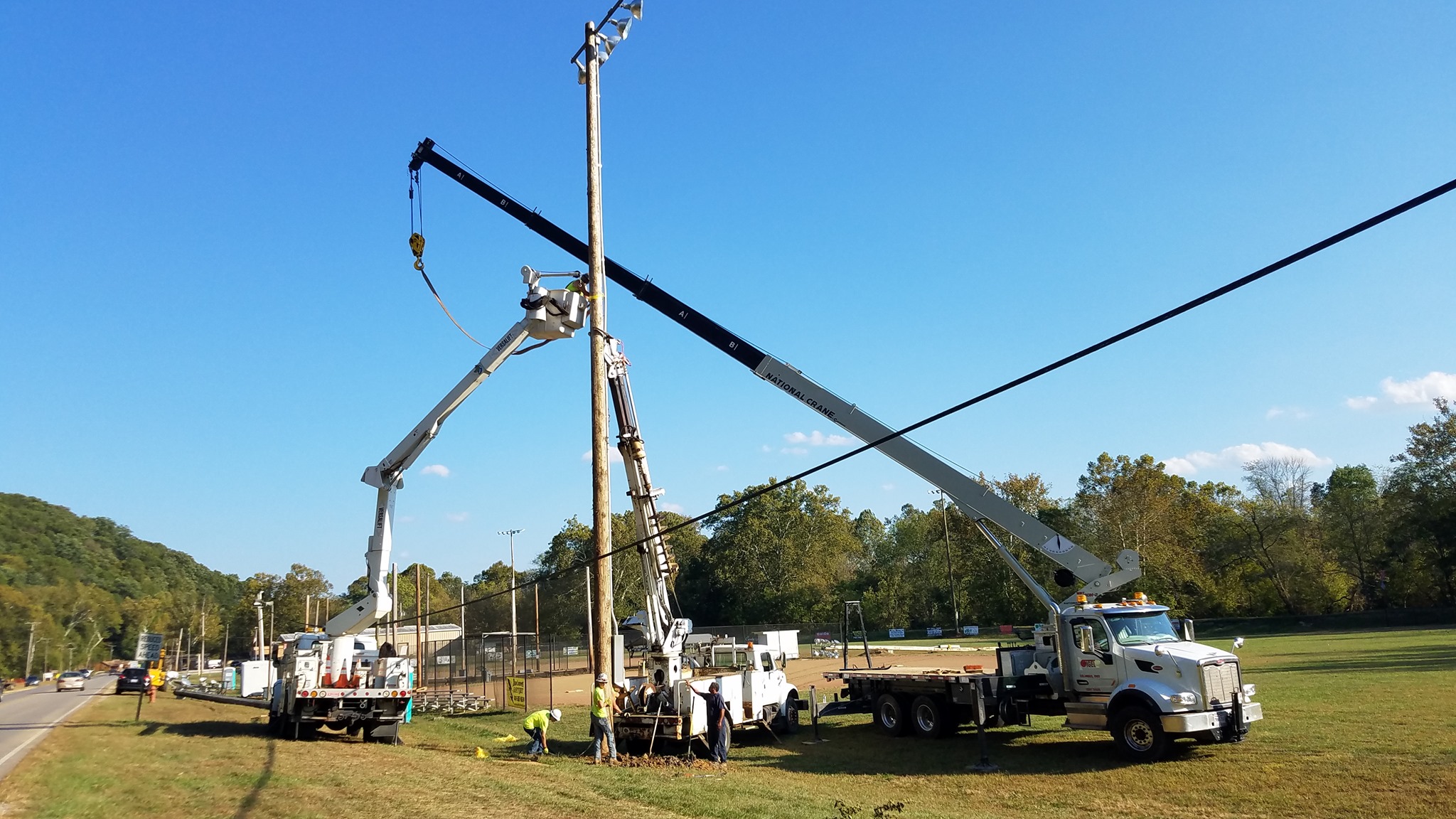 It is hard to play softball, baseball or any sport in the evening or night when you cannot see the ball. A lack of lighting could cut a fun and/or intense ballgame rather short.

This was sometimes the issue at Riverside Ballpark located on Chieftain Drive. It has spent the last five years with lights that made it nearly impossible for different softball leagues to compete at night. But this is no longer the case.

Setting up the poles took roughly a week to complete. The initial process started with a layout of where the poles would be placed and then determining how many lights would go onto each pole.

From there, the crews dug holes around the field where the poles would be placed. Placing the poles in the holes required strategic crane work and a few workers to balance the poles in place.

The next steps were determining the height of the poles, and figuring out whether the power would be run overhead or underground. The ballpark decided on underground lighting that connects to the light box on the pole.

“Then it is time to turn the lights on,” remarked Matt Mellinger, president of Riverside Ballpark.

The companies who donated the poles and their time and efforts to make sure the light posts were safe and fully functioning were all friends of Mellinger’s. Without them, he doesn’t believe this project would have ever come to fruition.

“When other people realize that someone else is doing something good for the community, people seem to pull together and figure out a way to make things happen,” Mellinger said. “If it were not for those people, I would not be where I am today with this ballpark. Not only that, but it gives people something to do other than go to work or go to school. It is an activity that keeps people busy.”

Mellinger added that each of the 10 poles would have probably cost him around $3,500 if he were to have paid for them. That price is without the cost of lighting. He received 56 lights for free from a school in Columbus that has since closed.

If Mellinger would have had to hire someone to come out and do the lighting, the bill could have been near a half a million dollars. And his estimate may have not been that far off the mark.

According to Sports Turf Management Association, typical field lighting for something like a high school football field, which includes lighting levels of 30 feet with adequate power sourcing generally costs anywhere from $200,000 to $400,000 depending on the field’s location and specifications.

The lights were a project Mellinger had been trying to start for a few years and now that they are up and running, he can branch out beyond softball and include baseball. This will also allow younger kids to play their baseball and softball tournaments at night.

“It will bring in a lot more people into the community,” Mellinger stated. “It would be nothing to have 12 or 15 teams come for an all night tournament. And That brings money into the community all over whether it’s restaurants, gas stations, hotel rooms or campgrounds.

“The thing about boy’s baseball and girl’s softball is that they don’t start until the evening and in the summertime, they only have a couple of hours before it gets dark,” Mellinger mentioned. “With the lights, they can play from the evening until as late as they need to.”

Mellinger runs the field through a nonprofit also called Riverside Ballpark, which he started back in 2013. The field held its first season in 2014.

Mellinger’s other profession is as a Deputy Sheriff for the Hocking County Sheriff’s Office. And because of this, he sees having extended hours at the field also as an opportunity for more community service.

“Since I am a nonprofit, it offers people a way to do community service,” Mellinger continued. “If someone is on probation and they have to complete a certain amount of service hours before they can finish up their probation, they can work at the ballpark. I have had thousands of hours completed of community service at the field in order for people to complete their programs.”

The lights are up and running and may get some use on Oct. 19 as the field starts tournament play for their men’s league.

See More Photos Of This Project